For this assignment, once again you can either use a real life example or an example from television.

Describe a situation or work environment where you have seen/experienced either good motivation or bad motivation. Explain what management or the company did right or wrong and how it could be improved or why it was already good. You can also simply make up a hypothetical situation and how you would choose to motivate (for example you could say: If I owned a small restaurant, I would motivate my employees by…. [then discuss your approach for motivation])

ASSIGNMENT 2.Part of a sociological analysis of groups includes the ways in which groups impact individuals. This includes influencing individuals to conform. There are different reasons why a person might go along with a group. For example:

The following video on the Asch Experiment demonstrates both of these. If you have facebook (I can’t seem to find it not on facebook), you can also watch this comical video on group conformity.

**There is no minimum number of examples needed, just be sure you are write at least 500 words.

ASSIGNMENT 3.Who Am I?

Part I: Twenty Statements Test
Write down twenty different responses to the question “Who am I?” (Ex. I am…) Don’t worry about evaluating the logic or importance of your responses- just write the answers in the order they occur to you. Give yourself five minutes to complete this work.

Part II: Analysis
Rate each one according to the four categories listed below. Evaluate, to the best of your ability, which responses fall into the A-mode, B-mode, C-mode, and D-mode categories.
A-mode responses are the type of physical characteristics found on your driver’s license: “I am a blond”; “I am short”; “I am a Wisconsin resident.”
B-mode responses describe socially defined statuses usually associated with group membership of some sort: “I am a college student”; “I am a Catholic”; “I am an African American.”
C-mode responses describe styles of behavior or emotional states: “I am a happy person”; “I am a country music fan”; “I am a fashionable dresser.”
D-mode responses are more general than individual: “I am part of the universe”; “I am a human being.”

The primary characteristics of the C-mode, or “impulsive,” self (Turner 1976) are the pursuit of individual satisfaction, an orientation toward the present, and a sense that the individual should not be linked to others and that group obligations inhibit individual expression. The primary characteristics of the B-mode, or “institutional,” self are a willingness to adhere to group standards and to accept group obligations as well as an orientation toward the future and a sense that the individual is linked to others.

Zurcher and Turner worried that a society full of self-interested (and even selfish), impulsive individuals might no longer care about the common good and would only work to satisfy their own needs. What do you think are the consequences for a society overwhelmingly populated by B-mode or C-mode personality types? (Your response should be at least a paragraph long)

ASSIGNMENT 4.In Chapter 6 the theories of Weber and  Ritzer as they relate to bureaucracies are introduced and examined. While Weber thought efficiency was a critical outcome of bureaucratic rationalization, he also was critical that it leads to things like disenchantment and dehumanization. He also argued that sometimes the rules and regulations governing bureaucracies led them to be more inefficient. This Dilbert Cartoon demonstrates this concept nicely. 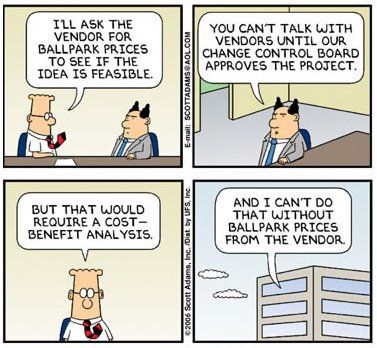 Ritzer expanded upon Weber’s theories, applying them to a globalizing world dominated by the principles of the fast food industry (namely McDonald’s). He too is critical of this bureaucratic rationalization contributing to disenchantment and dehumanization. Here’s a short clip to illustrate his points (and in the spirit of Halloween has somewhat of an old horror movie villain’s voice).

For this discussion, I want you to describe the worst job you’ve had (you can also use an example from someone you know if you’d prefer that). Describe what made it so horrible (you do not need to identify the company). Then examine how the characteristics of bureaucracy contributed to making it a horrible job (be sure to refer to Weber’s ideal type on page 163 as well as the lecture video where I expand upon this). Note: you MUST be able to attribute at least some of your feelings about the job to bureaucratic structure and organization. Then watch this video on a new corporate model at Zappo’s. Discuss how Zappo’s is addressing some of the bureaucratic constraints noted by Weber and Ritzer. Laslty, discuss how can we benefit from bureaucracies without being controlled by them.

In your response be sure to do the following:

1. Respond fully to the ALL the questions asked.
2. Reference your textbook in your response.
3. Respond to a fellow classmate.
4. Make each post at least 150 words in length.
5. Post on at least 2 separate days.

Looking for this or a Similar Assignment? Order a Paper Now